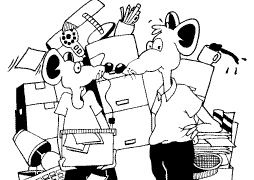 Did that title get your attention? No. While it would be quite ironic, I did not marry a pack rat. Mary Roach, a writer and columnist, wrote this funny article about her husband who she claims is a pack rat. He’s definitely not as bad as most. But sometimes it’s helpful to look at other people’s irrational thinking to be able to get a better perspective on our own. Enjoy…

For the past decade, my husband’s excuse for not going through his old LPs was that he’d do it when we move. We’re moving on Saturday. The replacement excuse is that he doesn’t have time because he has too much packing to do. One could make the point that there’d be less packing to do if he’d toss some of his stuff. Bracing for high seas, one does.

“So you’re calling this junk?” Ed is holding aloft a Tony Bennett album.

I am skating on thin ice here. Possibly I’m already down in the pond water, thrashing about with my skates. ”Not specifically.”

Ed says that many of his LP’s are irreplaceable. I recognize this argument. I believe I used it in explaining why I did not throw away, among other priceless items, a Pan Am airsickness bag, some rocks from the Arctic Circle with pretty orange lichen on them, and a 1987 USDA press release entitled, “Milestones in Dairy History.” But in those instances, it was my argument, and so it made excellent sense.

I press on. “But if you never listen to any of these albums, why would you want to replace them?”

Attempting to apply common sense in the scenarios is useless. I know this. Earlier in the week, I tried to discard a box of expired Super-8 movie film for which Ed has no camera. He vetoed the move, stating that he might one day find a Super-8 camera in a goodwill store. Also vetoed was the throwing away of two shelves of college paperbacks. The pages were yellowed, and there was mildew on with covers. If you listened carefully you can hear them reaching out and making friends with my lichen. “Some of these books have meaning to me,” Ed said, and then he paused. “I just don’t know what the meaning is.”

I recently read an article about hoarding in the animal kingdom. The male black wheatear bird, the article said, collects piles of heavy stones before mating season. “Those with the largest piles are more likely to mate,” the story explained and at the same time didn’t really explain. If I should die suddenly – which seems more and more likely as the week wears on – Ed should consider expanding his dating pool to include female wheatear birds. I’ll make a note of it in my will.

Ed tries to explain why he would want to keep a pile of records he never listens to. “It’s just knowing that they’re there. That I could listen to them if I wanted to.” I remind him that his turntable doesn’t work. “So, actually you can’t listen to them.” Which reminds me. I pick up the turntable and put it on the designated throwaway pile, which I had envisioned at the beginning of this undertaking as a towering, teetering mound engulfing most of our front entryway and portions of the sidewalk, but is in reality closer in size to the little mounds of toenail parings Ed occasionally stacks up on the bedside table. These are, happily, replaceable, and I encounter only token resistance when I throw them away.

“You can’t throw the turntable out. It belongs to Andrea.” Andrea is his ex-wife.

Ed looks genuinely puzzled. ”It’s broken. Why would she want it?”

In the end, we compromised. He kept some, and he sold some. He forgave me for the anguish I’d caused him, because he was able to get $240 for his LPs at the new and used music store. This he used to buy 31 used CDs, which take up not quite but almost the same square footage as the LP’s, and will impress the heck out of the next female wheatear who comes to town.

View all posts by: CarlaRae Arneson