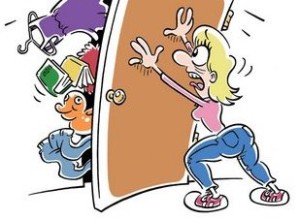 Here is a fun poem a client gave me about stuff. Maybe by the end of it you’ll get so sick and tired of the word “stuff” that you’ll be inspired to purge some of your own!

When the Good Lord calls me home, my children will want the good stuff. But the bad stuff, stuffed wherever there is room among all the other stuff, will be stuffed in bags and taken to the dump where all the other people’s stuff has been taken.

This spring I had an extra closet built so I would have a place for all the stuff too good to throw away and too bad to keep with my good stuff. You may not have this problem, but I seem to spend a lot of time with stuff… food stuff, cleaning stuff, medicine stuff, clothes stuff and outside stuff. Whatever would life be like if we didn’t have all this stuff?

Well, our lives are filled with stuff…good stuff, bad stuff, little stuff, big stuff, useful stuff, junky stuff, and everyone else’s stuff. Now, whenever we leave all our stuff and go to Heaven, whatever happens to our stuff won’t matter. We will still have all the good stuff that God has prepared for us in Heaven.

View all posts by: CarlaRae Arneson